2018 was an interesting year for Facebook. You could say it’s the year they woke up and realized people were actually paying attention… but it’s not clear they’re awake yet.

Kicking off with the Cambridge Analytica scandal and continuing with court appearances, dropping stock, the departure of Instagram’s founders and countless algorithm updates, Facebook has once again proven itself to be the most frustratingly unpredictable platform out there.

And yet, it remains the most valuable source of targeted traffic for affiliate marketers.

Although many alternatives exist and cross-platform strategies have grown in popularity, there’s one number that ought to bring you back to reality if you’ve been considering ditching Zuck’s pet project:

That’s why affiliates continue to invest thousands, even millions in ad spend on the platform. And if you’re one of them, doesn’t it stand to reason that you should also invest time in learning the non-tactical stuff?

In an industry defined by competitive advantages, consistently predicting changes - and proactively preparing for them - is too often overlooked.

How to read this article

This article aims to give you a thorough overview of Facebook’s biggest changes in 2018. Most information has been pulled directly from Facebook, with some excellent insights from 3rd party reports and news outlets.

The intention is to aggregate and deliver all the relevant hard facts we could find about Facebook over the past year. Each of us has a different approach to Facebook, and thus our conclusions will be different.

Summary of Major Changes in 2018

A lot happened. A LOT. We’ll focus on just the events that affect the advertising, data and tracking side of things. Let’s start from the beginning… 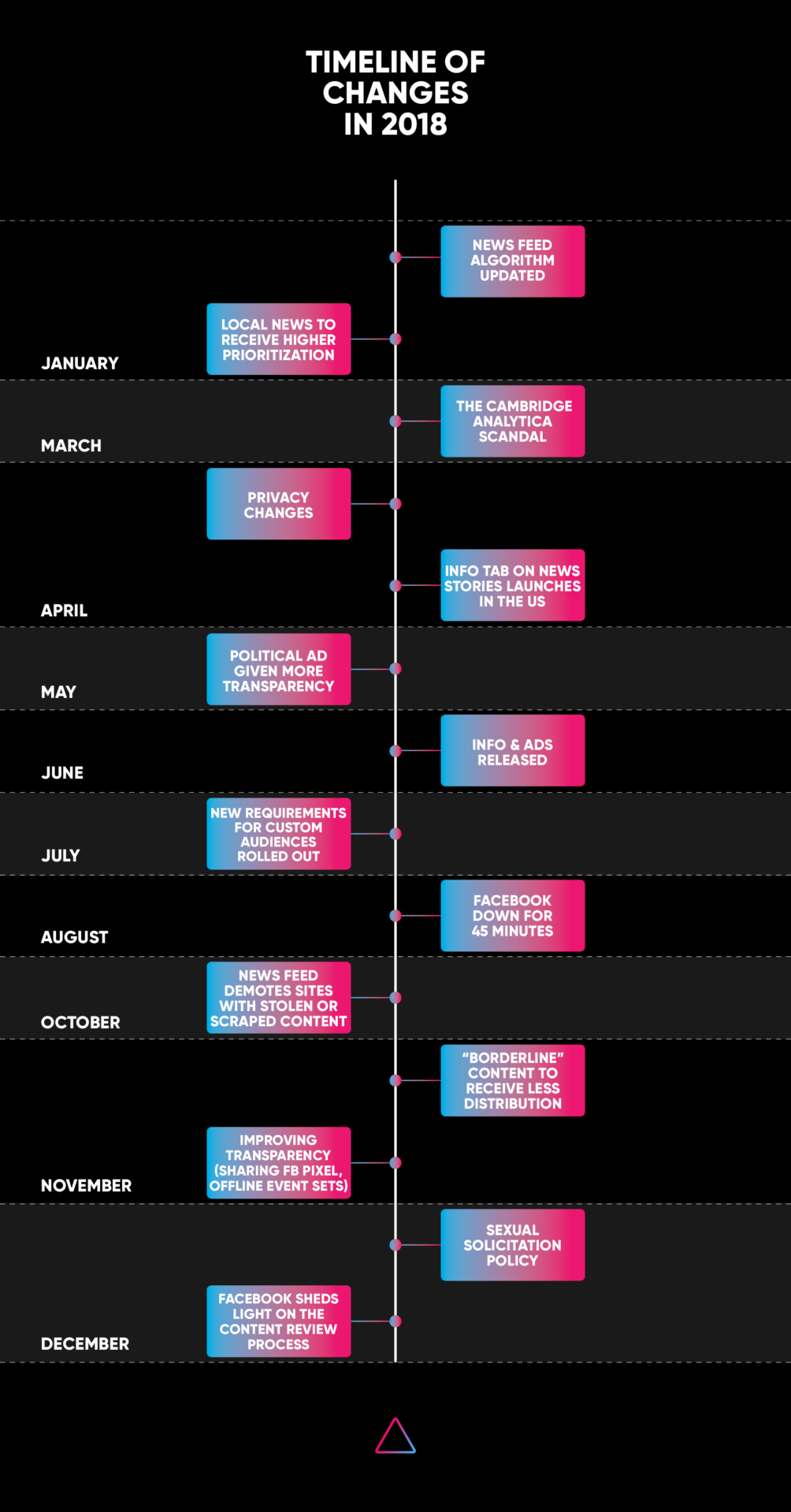 As part of the response to fallout from the 2016 US elections and Brexit vote, the News Feed Algorithm received a major update to prioritize “meaningful interactions between people”.

“...we will prioritize posts that spark conversations and meaningful interactions between people. To do this, we will predict which posts you might want to interact with your friends about, and show these posts higher in feed. These are posts that inspire back-and-forth discussion in the comments and posts that you might want to share and react to – whether that’s a post from a friend seeking advice, a friend asking for recommendations for a trip, or a news article or video prompting lots of discussion.”

News from publications that the community rates as trustworthy

News that is relevant to people’s local community”

The potential reach of news sources was impacted this time, and is now dependent these 3 primary factors. Facebook stated that “you'll see less public content, including news, video, and posts from brands. After this change, we expect news to make up roughly 4% of News Feed -- down from roughly 5% today.”

This opens up 3 questions:

1. How does Facebook determine if a news source is “trustworthy”?

A: It’s subjective; they send out surveys to “diverse and representative samples” to gauge whether or not they recognize and trust various sources.

2. How does Facebook determine if a news source is “informative”?

A: This is also subjective; they actually began surveying users in August 2016, asking them to rate how informative an article is from 1-5. This rating is aggregated and those receiving positive scores (above 2.5) are promoted while scores lower than 2.5 are demoted.

3. How does Facebook determine if a news source is “local”?

A: This is less clear and a longer process. The biggest step taken comes in a new feature: “Today In”, which features local news updates for specific areas. Users self-identify as living in a particular local area. Facebook began testing with 6 cities in January 2018 and the feature has now rolled out worldwide.

We don’t need to go into much detail on this one. As you all know, the CA scandal uprooted already-shaky confidence - not only in Facebook, but in all social networks and essentially any entity that houses data. It preceded GDPR by about 2 months and attracted extreme levels of scrutiny from Facebook users.

The fallout from this will be felt for years to come and most major changes will likely be traceable to aspects of this PR nightmare.

P.S. Facebook’s punishment was announced in October: a crushing £500k fine. (They generate about 90 times that amount every day.)

Hot on the heels of the CA scandal, Facebook quickly implemented a series of privacy changes. Here’s an overview:

This meant that a lot of the techniques marketers used to gather data without consumers’ consent were blocked or severely limited. Perhaps the biggest change was the removal of Partner Categories.

April: Info tab on News Stories launches in the US 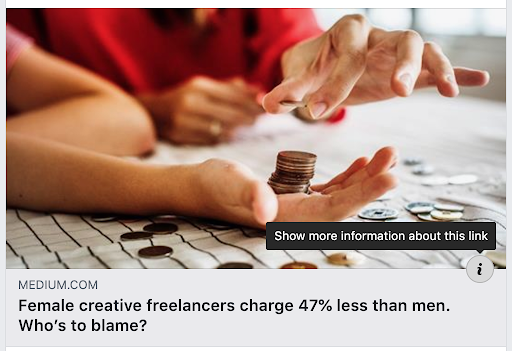 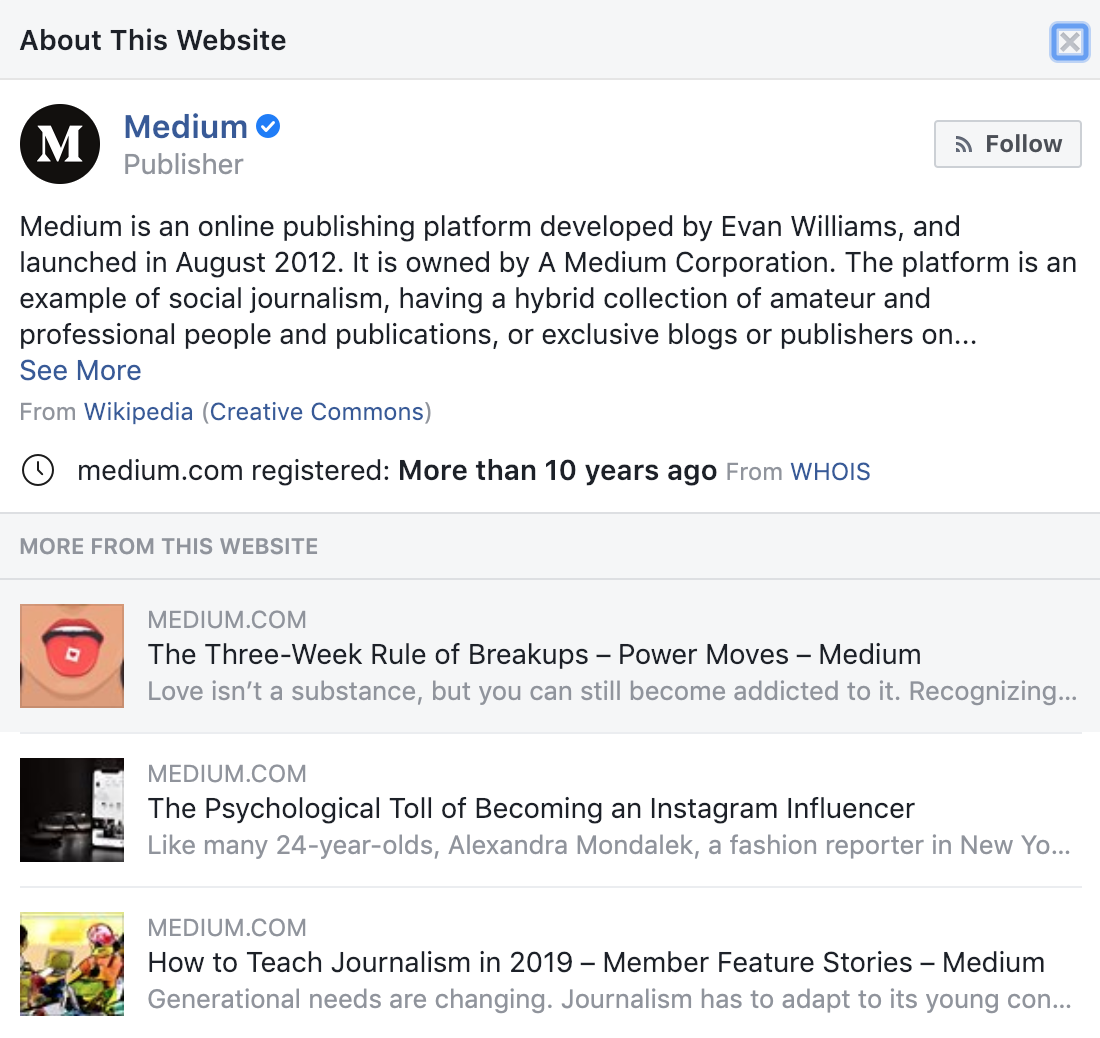 Facebook had already been testing a tab that gave context to news articles, but they rolled it out across the country in April. The tab included:

With the full rollout, they added two more tabs:

As of January 2019, this feature has now rolled out worldwide.

May: Political ads given more transparency

All political ads in the US started including a “Paid for by” disclosure and were archived for public access.

As a result, all political ads (and ads focusing on issues of national importance) can easily be searched and found at the Facebook Ad Archive. This feature is currently only available in the US, the UK and Brazil.

Facebook introduced a new tab: Info & Ads. This section allows you to see all active ads being run by all pages (no longer just political).

Overnight, spying and transparency reached a new level - although frequency or post engagement isn’t shown on the Info & Ads tab, you can easily access all advertisements run by your competitors in one place.

Although there was a trick to hide this (changing your page to a Video Page), this no longer appears to work.

A number of updates affected targeting and custom audiences, including: 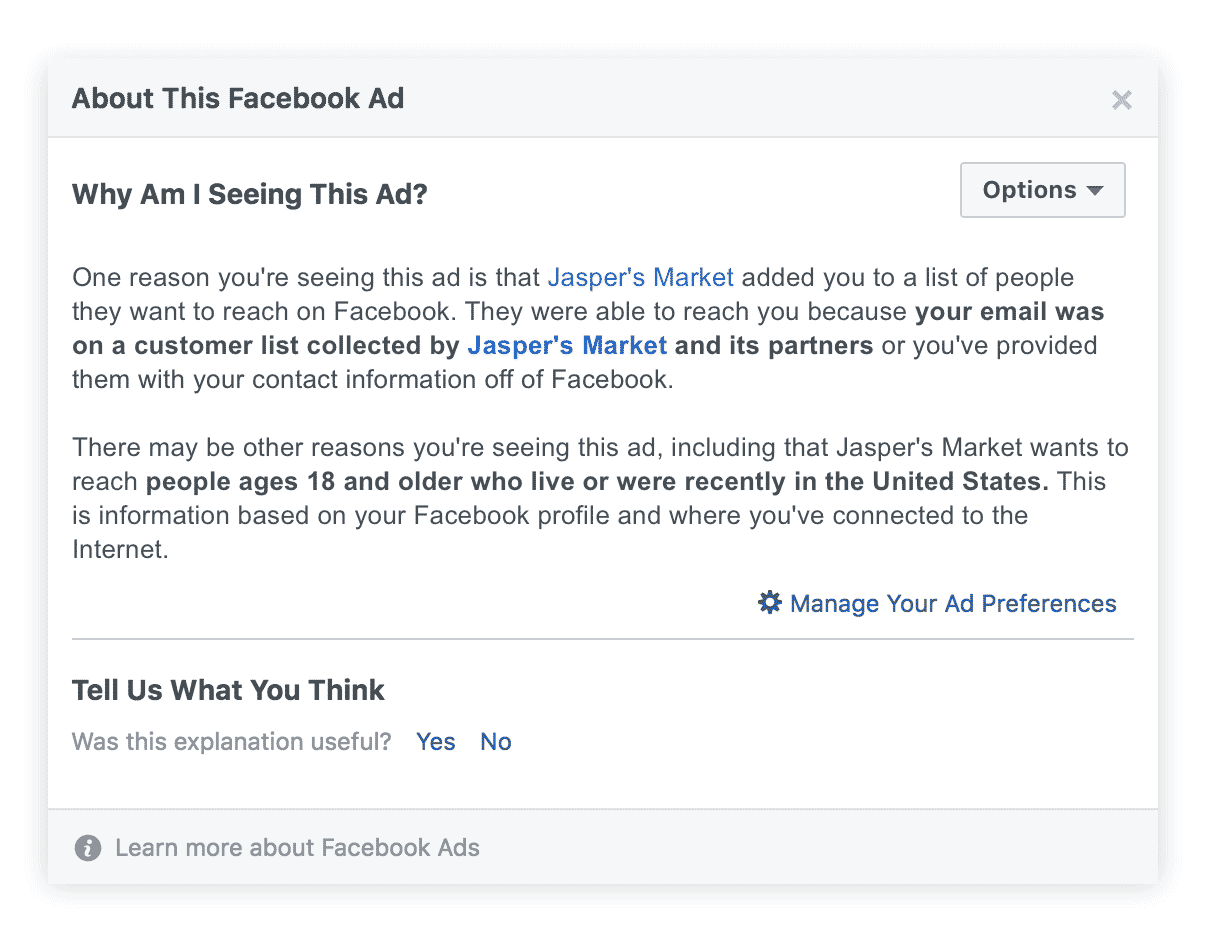 Facebook experienced approximately 45 minutes of global downtime, giving us all a peek into the true impact Facebook has on users’ content discovery habits. In those 45 minutes:

Similar in theme to Google’s Panda update back in 2011, Facebook is now demoting links to scraped or low-quality sites on the News Feed.

What’s most interesting about this update is that it’s a sort of one-two punch, coming on the heels of yet another data breach in September, which affected 50 million users. If any of those profiles were scraped and used in sites, Facebook would (theoretically) automatically demote the content, preventing it from ever appearing.

Facebook’s intention was to make stealing content less profitable, although this primarily focuses on organic traffic. It’s not clear how ads are affected.

We stole this explanation from TechCrunch, who broke the story:

Its systems compare the main text content of a page with all other text content to find potential matches. The degree of matching is used to predict that a site stole its content. It then uses a combined classifier merging this prediction with how clickbaity a site’s headlines are plus the quality and quantity of ads on the site.

In order to improve user interaction with content, Facebook began its attempts to reverse the natural pattern of engagement, which rewards content the closer it gets to crossing the border into prohibited areas: 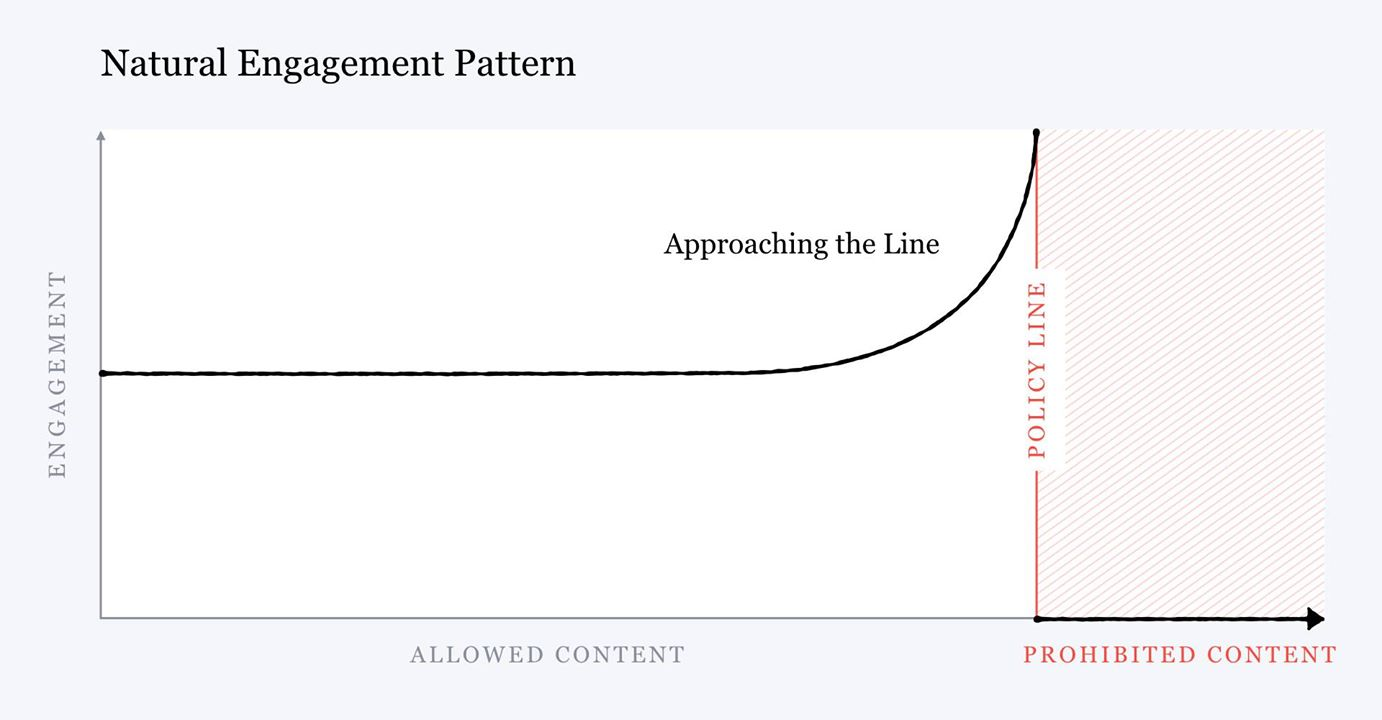 With this update, Facebook aims to reverse the upward trend in engagement, replacing it with demotion: 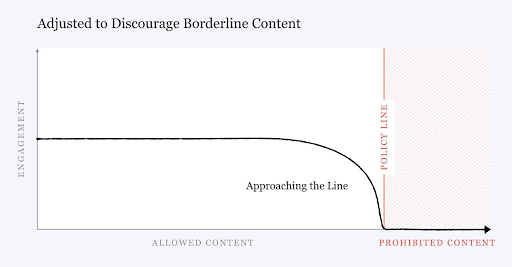 For affiliates, this has traditionally been the “sweet spot” - maximizing engagement but avoiding crossing the line and facing penalties.

Penalties to borderline content will affect not only the News Feed, but all site content - including Groups and Pages.

This isn’t the first time Facebook has tackled this issue. Starting in 2014, it downranked links with high bounce rates from people who didn’t “Like” the referring post. In 2016, Facebook began analyzing headlines for common clickbait phrases, and this year it banned “clickbait rings” for inauthentic behavior.

The update is new and still rolling out, so the verdict isn’t in yet… but if you’ve noticed certain angles working less effectively recently, it could be worth checking out the full post from Mark Zuckerberg.

This updated followed the removal of Partner Categories and the changes to custom audience rules, adding new controls for sharing the Facebook pixel and offline event sets.

This is all about transparency and doesn’t impact ad serving directly. From Facebook:

In order to begin sharing pixel or offline event information with another business, you’ll need to define your business’ relationship with the business you want to share data with and review and reaffirm your compliance with our existing Business Tools Terms of Service.

Those businesses who have already shared their pixels prior to November have had to re-authenticate their shared assets.

Some claim that this will push innocent users off the platform, as even “Netflix and chill?” could be considered running afoul of the new rules.

After the New York Times attacked Facebook for what they called “ad hoc” policy-making, Facebook responded by clarifying their process for reviewing content and determining policies.

Here are the key takeaways:

These have only been the main highlights; this was clearly a year of immense change at Facebook.

The biggest changes that you may have missed were:

We suggest reading the updates carefully to ensure you’re still compliant; these updates undoubtedly contain the keys to understanding the account bans that have risen dramatically in recent months.

Of course, staying up to speed is a constant challenge. We’re just over a month into 2019 and Facebook has already posted 16 updates to the Newsroom - and sadly, very few are relevant to our industry, so it’s hard to keep on top of valuable lessons.

That’s why we tend to learn from each other in groups, forums and private discussions. However, going directly to the source on occasion can unlock valuable insights - and allow you to act on them faster than the majority.

Do you have thoughts about what Facebook will do in 2019? Let us know in the comments or reach out to your AM - we love discussing this stuff!

PREPARED FOR THE FUTURE: ANNUAL INTERVIEW WITH ADVIDI’S CEO (2019)
The Ultimate Guide to Moscow Affiliate Conference